Its taken me over a week to feel like posting up this walk.  We had a fantastic time in Snowdonia courtesy of my very good friend Larry Kevans who was generous enough to offer Diane and me the use of his beautiful cottage in Carmel.  However, in the week since we arrived back Larry sadly passed away.  His death has hit me hard and I will miss him dreadfully. He was a walking man who, up to the very end liked nothing more than donning his boots and getting up in the hills. One of the walks he did often was Curbar-Frogget-White Edges (Walk 2) I will forevermore do that walk with a smile on my face and Larry in my heart.
We therefore dedicate not just that walk, but the whole of the 100 Mile Adventure to Larry Kevans, one of the nicest people anyone could ever meet.  He was a walker and a true friend.  We loved him.
OK.  The last thing he would want me to do is to be miserable, so lets move on to Walk 5, a hike around Capel Curig: 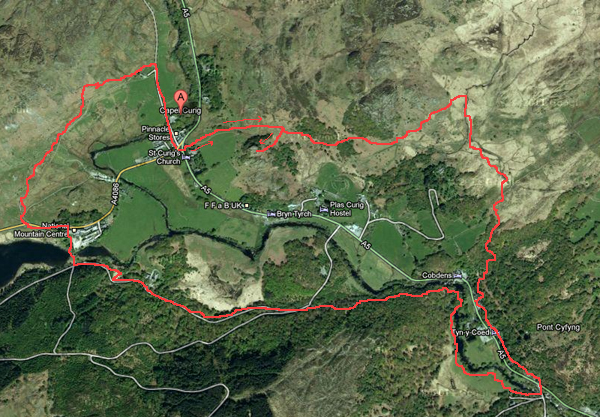 After our trek around the basin of Llyn Idwal the day before I thought a nice simple, uncomplicated and gentle walk around Capel Curig would do the trick.  A walk which is not too difficult but which offers some easy challenges.  I have a soft spot for Capel Curig, its where I came as a very young Army recruit for some leadership training, the perfect place.
We parked the car in the public car park behind Joe Brown's outdoor shop in the village which is well worth a trip inside when you get back!
Walk out of the car park the same way you came in and head for the War Memorial across the road you will see a ladder stile, over you go!  The path is very well defined and begins to climb gently as you head into the field. Here is the view you should see looking back toward the village: 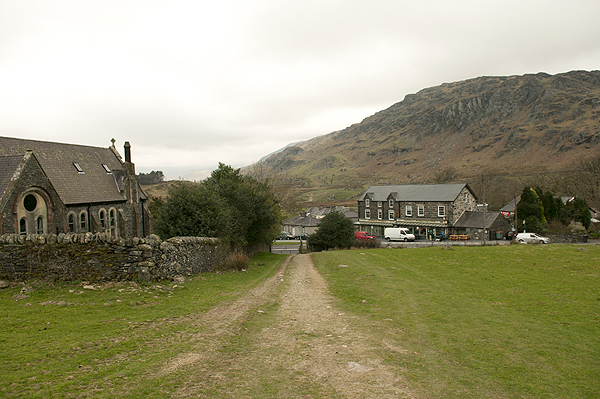 In front of you are two peaks, the one on the left the highest.  The path takes you between the two and the smaller one to our right we just could not resist so we took a little detour and went to the top.  There is no marked path, well we didn't see one so its a bit trial and error, the view from the top is well worth the climb up  (so much for a gentle days walk)!  A couple of shots from up top: 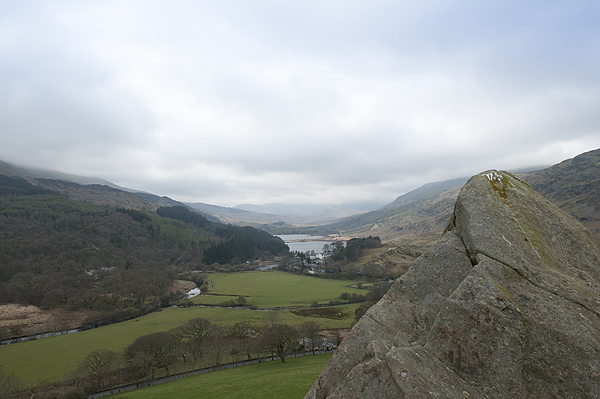 The first peak we came to had the climbers 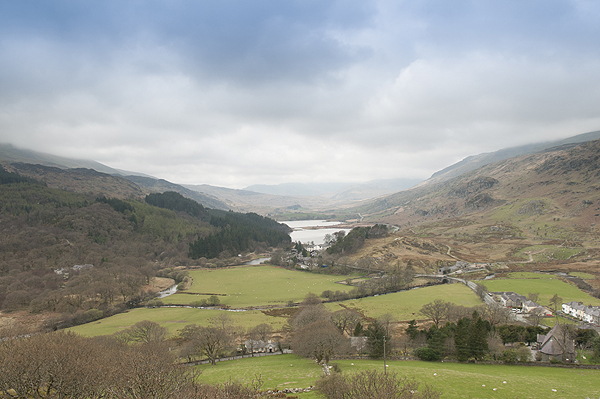 Just a few feet higher the top was reached
We did see a few ropes up there and we heard a few voices down below so I can only assume this is a popular climbing spot.  Head back down to the track to continue the walk: 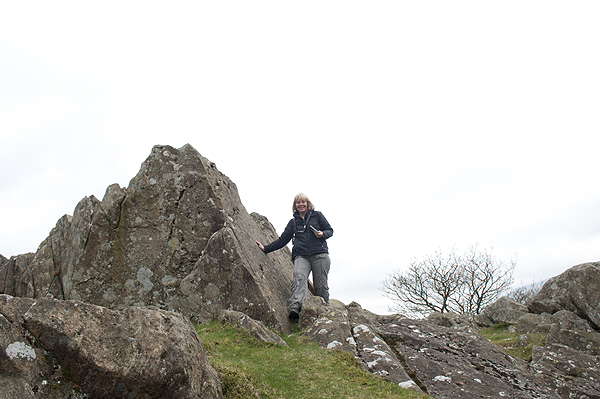 Diane scrambles back down
Once you hit the track continue east heading for the woods as you come out of the woods you hit open moorland.  Go though the stile and continue along.  Shortly the path splits, left, right and a path signposted by two markers to the right, over the footbridge.  The ground was extremely boggy and we really had to watch where we were going (hence no photos of this stretch).  We had a bit of a panic as we nearly lost Milly in one of the Peat Bogs, luckily I turned round and saw her just as her head was disappearing under the bog.  I quickly threw my camera and tripod to the deck threw off my bag and ran to where she was.
I managed to grab her collar only for it to slip over her head.  Thankfully she is carrying a bit of timber so I managed to grab the skin around her neck and keep her head above the bog.  After a while I managed to pull her out. Was she grateful? Nah she just carried on running about as if nothing had happened, I suspect she enjoyed the bit where she remained absolutely caked in mud until we made the river later on in the walk.  Its fair to say it will be a talking point for Diane and me for years to come as we were a bit taken aback by the whole episode.  So if you do ever manage to complete this walk and you do have a dog. This is the bit where you need to keep a keen eye on what they are up to.
After crossing the bog you hit a path in front of you going left to right (or right to left whichever takes your fancy) turn right onto the path and follow it to the next stile.  This path is well worn and sturdy underfoot so no danger of dogs disappearing.  The path starts to descend into green fields with a view back to Capel Curig: 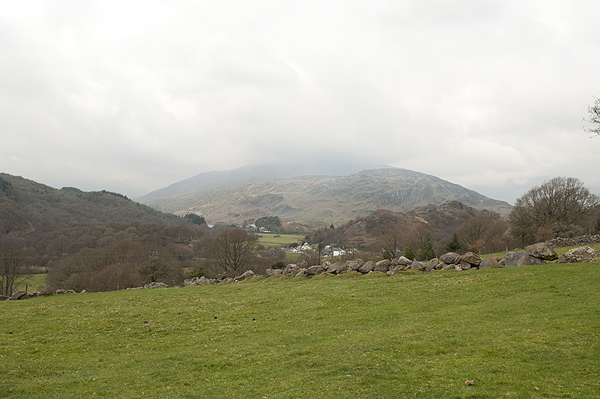 Capel Curig in the centre of the picture
We stayed here for a well earned coffee break and trying to calm our nerves after Milly's escapade!
Its a very peaceful place and nice to take in the views.  Whilst drinking our coffee we were approached by a lady who was lost and heading for some place who's name I cant remember so I explained to her where we were on the map so she could mark her map but she didn't have a map!  No wonder she was lost, I just hope she got back ok.
After the coffee we carried on through the field, the path began to sweep left heading for a wood.  Cross the stile and head along a well defined path through the woods which takes you to the main road (A5) beside a school.  Turn left and walk along the pavement for about half a Km until you see a track go over the river on the opposite side of the road.  Cross the road and follow the track over the bridge, as soon as you're over the bridge take the footpath to the right which kind of follows the river heading back into Capel Curig.  As we walked down the river we found a lovely spot where we could allow Milly her 15 mins of fun, it was also an excuse to wash that stinking mud off her which virtually coated every inch of her body: 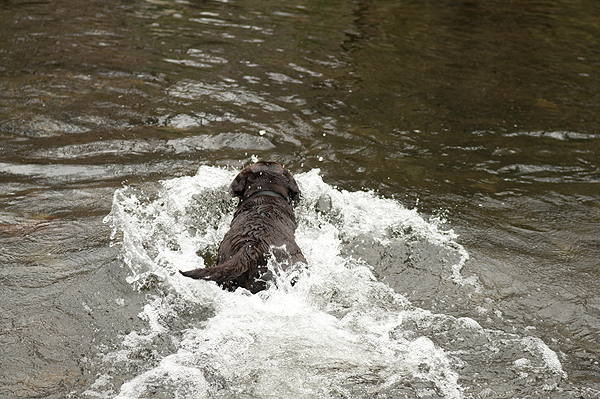 Milly all nice and clean
While Milly had her fun I took the opportunity to snap a photo of the running water: 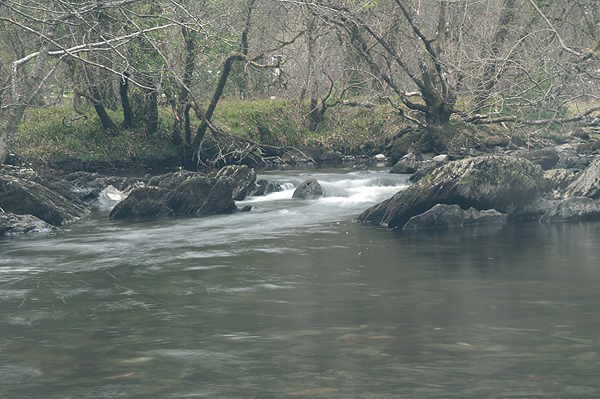 Playtime over we set off again along the river.  In a short time and after a scramble over some rocks you come to a footbridge opposite the Cobden Hotel. Ignore the footbridge and take the track up to the left and into the woods.  The path sweeps around to the right and in a short time it turns into a forestry road.  Follow the forestry road for about a mile and a half, ignoring the fork to the left continue along the track and you will reach a building called Bryn-engan, its like a youth hostel type of place.
As you pass Bryn-engan the track widens as it reaches the tip of a lake (Llyn Mymbyr).  At the tip of the lake is a bridge with a footpath up to the road (A5).  Take the path and head up to the road. 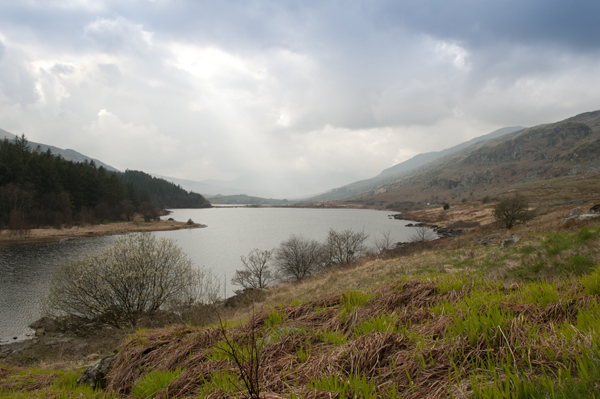 The view over the lake as you climb up to the road
When you reach the road, turn left and follow it along until you see a ladder stile and gate on the opposite side.
Go over the stile (or through the gate) and follow the path that goes straight ahead.  The track soon begins to swing to the right and climb up towards a farm: 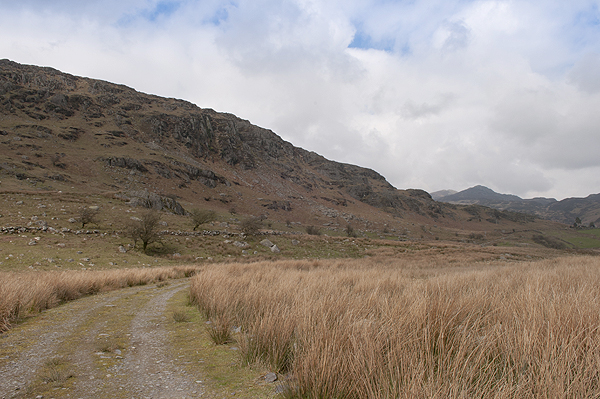 Track swinging to the right with the farm just in shot (centre of the photo on the right edge )
A gentle climb up to the farm allows you to take in the views, really nice and very peaceful. 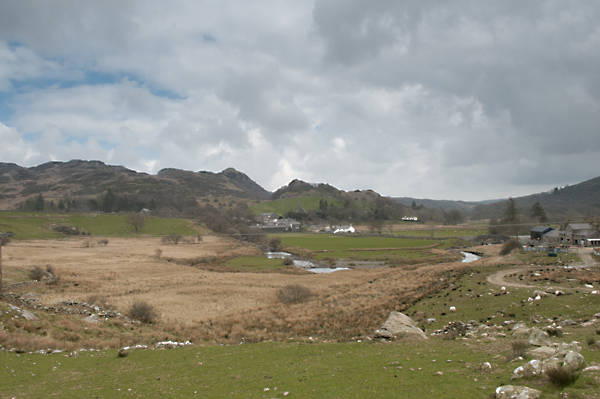 View back toward Capel Curig
The path takes you up behind the farm to a well worn farm track, I liked it up here and was very envious of the people who lived there.  Oh to have all this on your doorstep everyday.  I wouldn't mind it in winter either! 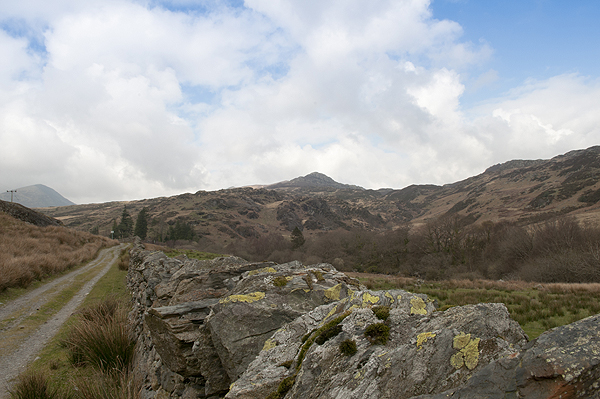 View to the left
When you reach the track its a right turn through the gate and back down towards the village of Capel Curig. 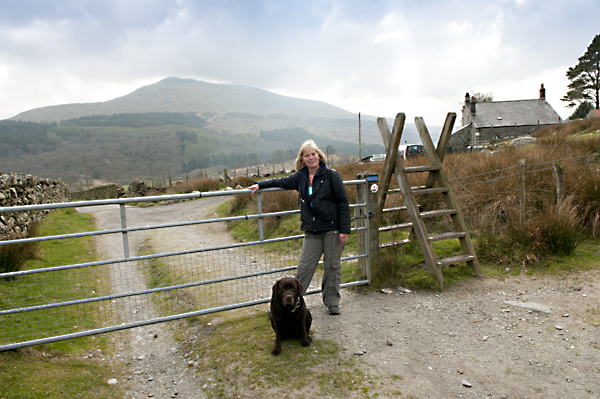 Diane and Milly near the finishing line
Go through the gate and keep left and follow the track down the hill, it brings you back to the car park behind Joe Brown's shop.
Something I should mention which Diane doesn't think is funny.  When we got back to the car Diane nipped to the loo while I took my boots off.  As soon as I changed footware I decided I should go to the loo myself.  On my return I was greeted with a bit of a glare from Diane.  I had gone to the loo leaving my expensive camera and even more expensive lens on the roof of the car.  Luckily Diane returned shortly after I left so no harm done, but she did get some accusing looks from a couple who were probably eyeing the camera up as Diane lifted it off the roof and went to look in the shop window.
No harm done eh!  (Phew!)
I hope you enjoyed reading the latest walk, not sure when the next one will be, probably in about 3 weeks when we shoot off down to Cornwall for a week.
Watch this space...
Mark, Diane and (a clean) Milly
Dedicated to my colleague, mentor and dear friend.  Col (Retd) Larry Kevans
Posted by Mark Jones at 12:18