The second walk on our trip to Cornwall.  In all honesty this was meant to be a nice, short, gentle stroll on our penultimate day.  The intention was to have a stroll up and have a look at Bedruthen Steps, 3 mile maximum. We kind of got a bit carried away though......


We only normally do circular walks as I am not keen on backtracking over my footprints and seeing the same things on the way back.  However a good friend of mine once told me that the views on the way back are different and I should not dismiss it.  This he told me on a walk along Stanage Edge and he was right as he always was.  Hence why I repeat in my walking blogs that you should always take time to turn around and take in the view behind you.


Anyway, this is most definitely one of those must do walks if you are in this area.  This coastline is absolutely stunning, we love it. 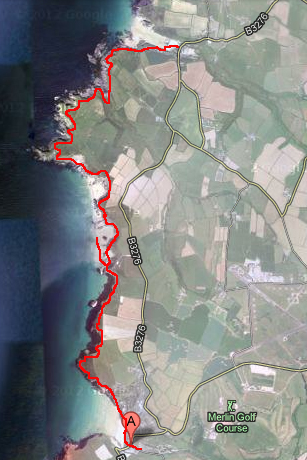 The walk starts at Mawgan Porth where you can find plently of parking very close to the beach behind the Bakery and Newsagents, also plenty behind the pub "The Merry Moor".

Cross the road and walk onto the beach, the coastal path runs right across the beach and is signposted to 4 1/2 miles to Porthcothen. Head right and follow the path over the dunes.  If the tide is out try walking right along the beach until you reach some steps that climb up the cliff, its a bit harder but its such a beautiful beach and it would be a shame not see it at eye level.

Once at the top of the steps turn left and follow the path up the hill leaving the beach at Mawgan Cove behind. 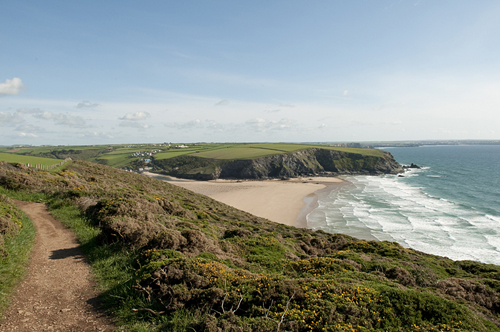 The footpath is very easy to follow and very well marked so its a bit pointless me trying to offer directions.  This blog is more about encouraging you to don your boots and get up there, hopefully my images will more than tempt you.

The footpath sweeps around the cliff edges following the lines of the hidden coves the first one being Trenance Cove.  The path gets a tad too close to the edge here so care should be taken.

Carry on along the path and as it starts to descend, Bedruthen Steps comes into view.  Bedruthen is long narrow beach that has three rock pinnacles along it, I am not sure where the Steps bit comes in but I assume its reference to the steps that go down to the beach.

The view as you approach Bedruthen Steps: 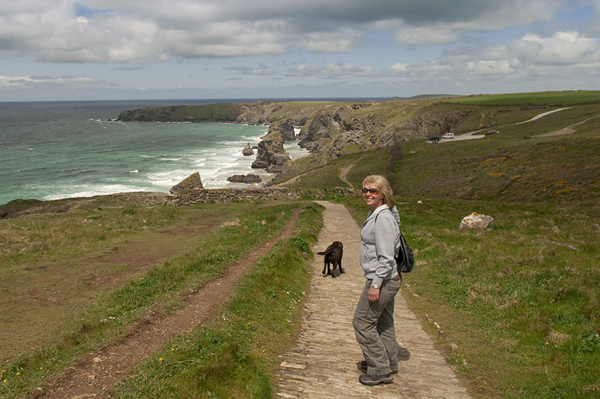 As we approached the tide was on its way out so we had timed it right to take the steps down onto the beach.  Now, the steps...  These are very steep and if you suffer from vertigo you are in for some problems, the steps are high and extremely close to the edge, no photos I'm afraid, I was ******** myself and hanging on for dear life.

Once down on the beach though, WOW!  This is some beach, absolutely gorgeous.  Its spotless, and rugged and breathtaking.  A series of images: 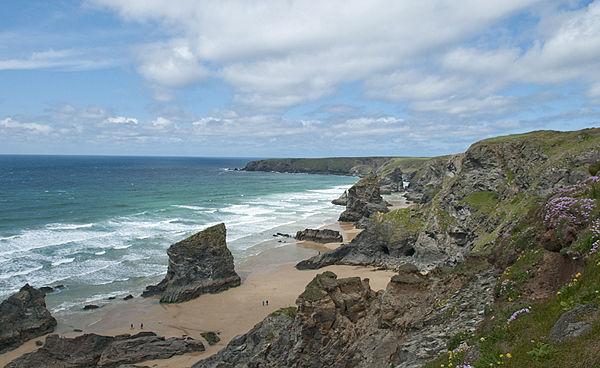 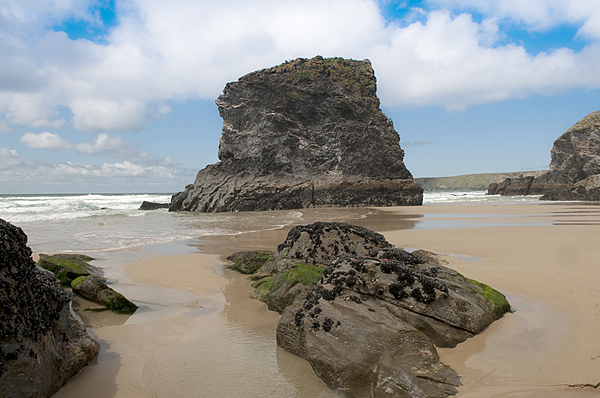 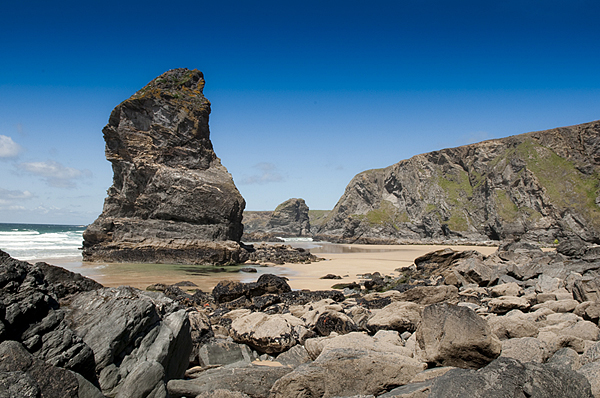 And then there is the climb back to the top: 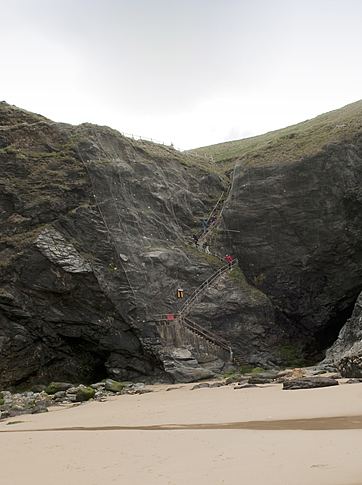 It was at the top (after I got my breath back!) that we decided not to go back but to carry on to Porthcothen.  We were not sure exactly how far it was (we didnt notice the sign back in Mawgan Porth) and I suggested to Diane that it wouldn't be that far.  I didn't have a map but I remember noticing that Porthcothen was the next village along the path when I looked at the map the night before.

So at the top of the steps we turned left and continued along the path.

It added an extra 6 miles on to the walk plus with the stroll down to the beach at Bedruthen you could probably add a bit more.

As I said before, the path is very easy to follow, no chance of getting lost so just walk and enjoy the view.  The path meanders over fields and along the edge of the cliffs.  The views of the coast line: 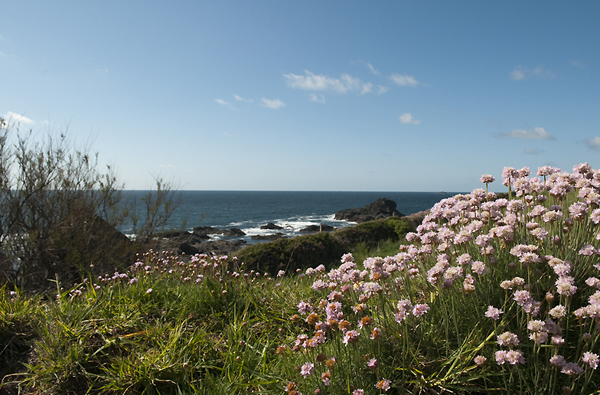 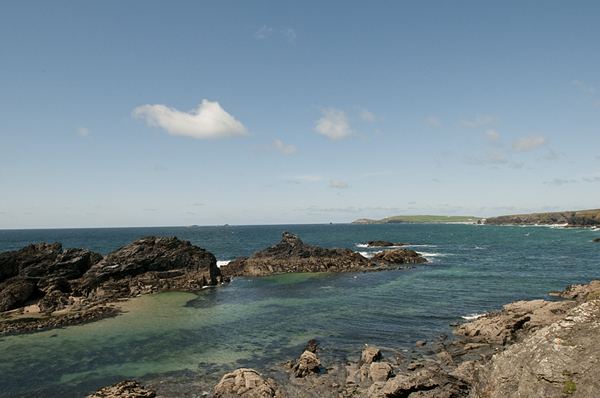 The weather this particular day was really nice, a bit windy but nice and sunny.  I was surprised how few people there were walking this path.  Its worth noting though that this section of the coastal path is a fair distance from any large towns, in fact there is very little in terms of villages between Newquay and Padstow (Padstein).  Another good reason to do this walk!  Its not that I don't like to be around people but sometimes you just want some peace and quiet to take it all in if you know what I mean. 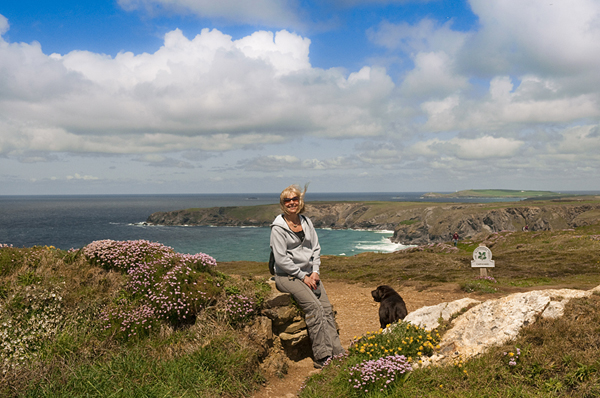 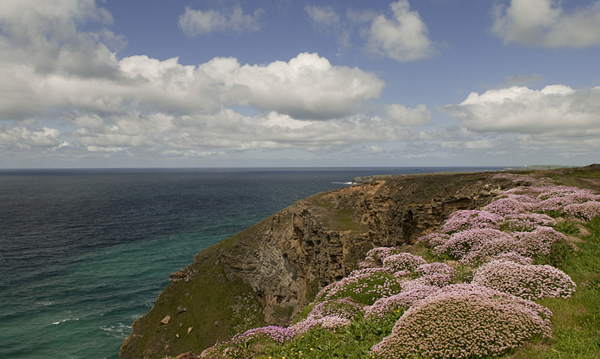 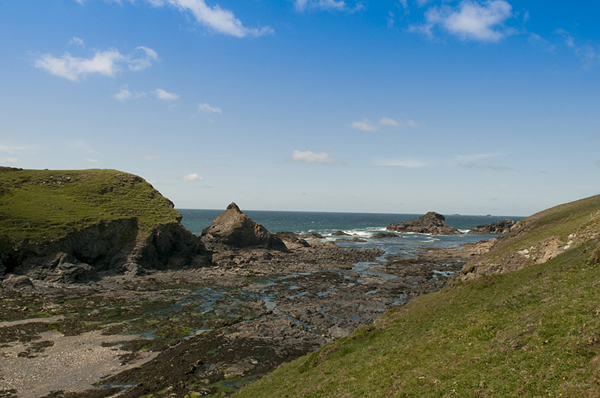 As you approch Porthcothen the path gives you an option of continuing along the coastal path or taking the steps down to the beach, we decided to take the path and return along the beach on the way back and up the steps to the coastal path.  Be mindful of the tides though as the cliffs are very steep and I could see where it would be possible to get cut off.

The signpost informing you that you have made the 4.5 miles from Mawgan Porth isn't actually in Porthcothenm there is still some way to go to get a brew, about another quarter mile.

Keep on the path and you come to a shop/cafe.  We decided to take lunch here before we started back, the pasty was really nice, the coffee really good but the woman in the shop was not what you would call a happy sort, no please or thank you just a bit abrupt for my liking.  I am sure she's ok but it was probably down to the fact it was a glorious day and she had to work. 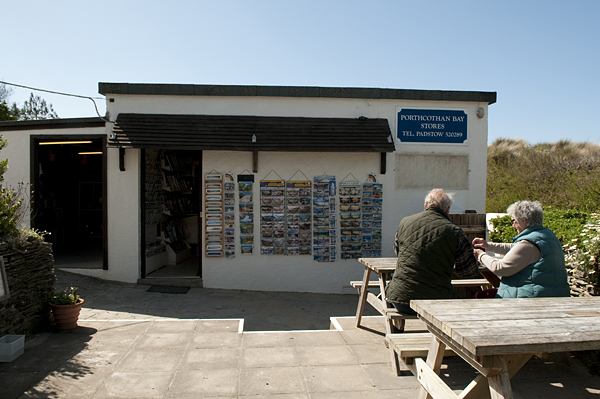 After finishing off the pasty it was time to get going and head back to Mawgan Porth.  Just to the right of the shop a path goes up a sand dune and heads out into the bay.  The tide was way out so it was safe to skirt the left hand edge.  This is a real treasure, when you sit at home and dream of nice beaches draped in sunshine, this is it my friends, apart from a couple of surfers this beach was empty.  We loved it. 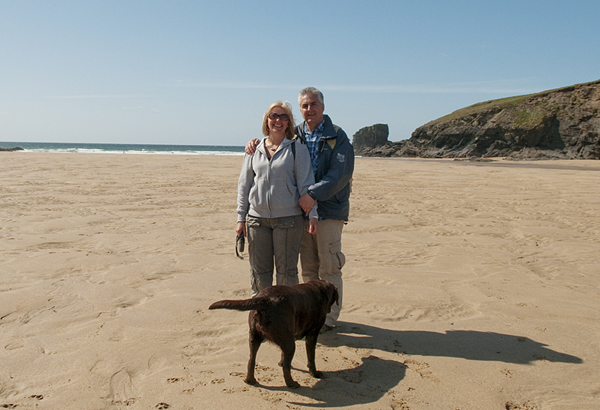 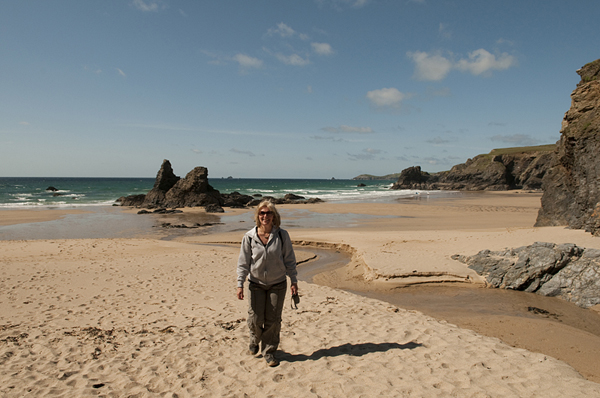 We climbed up the steps back to the coastal path, turned right and headed back towards Mawgan Porth.

The walk back up towards Bedruthen Steps is a good one, its a climb in places but the views you get are far more overwhelming than you would have thought.  My belief was that I had seen it on the way to Porthcothen so it was probably going to be the same on the way back, I couldn't have been more wrong.  Larry was so right about this myth I had, mind you, he was always right and I should have known better.

As we approached Bedruthan a couple were walking toward us with their two dogs, one of the dogs, a small Jack Russell took a dislike to Milly and decided to have a go, its owner rushing to pin it back.  Nothing drastic, typical Jack Russell behaviour.  As the guy called his dog back I instantly thought I recognised the voice.  As the guy got nearer I was certain I knew him and asked "Are you Col Mark Cook" to which he looked in my direction and his chin nearly hit the floor.  Mark Cook and I served together in Hong Kong 25 years ago with the Gurkhas and we have not come into contact since.  What a small world eh!  We had a chat and caught up although I knew more about him as he had become a bit of a celebrity over the years and was even presented with the Big Red Book on "This is Your Life".  It was brilliant to catch up with him and his lovely wife Caroline.

So, onwards and upwards, we carried on along the path with Bedruthen Steps coming into view: 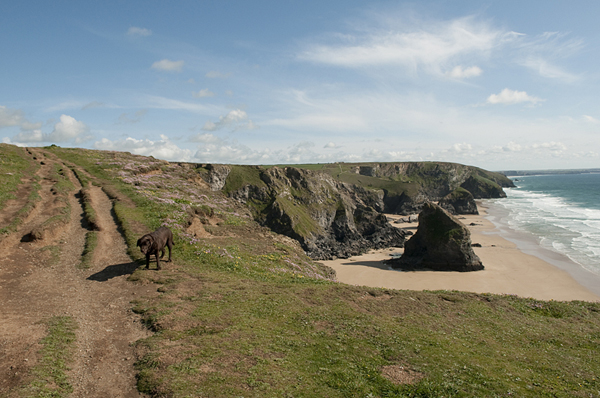 By now the tide was fully out and the three pinnacles were very prominent on the beach.

After 1.5 miles the sight of Mawgan Porth bay comes into view and its back to the start point.  Back in Mawgan Porth you may choose to buy a pastry from the Bakery or a Cornish Cream Tea from the Merry Moor.  Now this is not compulsory but hey, if its a nice day, it would be a shame not too.

We did two really nice walks whilst down in Mawgan Porth, Cornwall.  Mawgan Porth is a very quite place, no ammusment arcades, no nightclubs, just a pub, a Bakery, a Bistro and a newsagents and of course the surf school.  There is not a lot of accommodation but there are chalets and a couple of static caravans.  If you like it quiet, close to a beautiful beach and not much else then have a look at this place.  We will definitely be back and soon.

We drive up to the Yorkshire Dales in a couple of weeks so watch this space for the next instalment.

Thanks for reading, hope you enjoyed it and I hope it motivates you to get out there and do some walking.